Search
Shopping cart
Back to all stories

What does it take to do the PDG?

Starting in the middle of the night in a team of three and trekking halfway across the Swiss alps in a 60km high-speed chase, accruing enough elevation to take you halfway to Everest, the Patrouille des Glaciers has earned its title as one of the most iconic ski mountaineering races in the world for good reason.

Organised by the Swiss Army, the epic race from Zermatt to Verbier has become a popular bucket list item for many of the world’s strongest endurance athletes. While the race has grown in popularity, the gruelling course is not for the faint of heart and success is reserved for only the most driven mountaineers.

This year, Mountain Air has three athletes in the mix and they’re finding out first-hand what it takes to triumph in the PDG.

Mountain Air’s Tess Lawson set her eyes on the PDG two years ago. A seasoned road-cyclist and long-distance runner, Tess watched her brother cross the line of the 2018 event and knew immediately it was something she wanted to do.

“I’ve done some big endurance events before, but never a mountaineering race like this,’ she says. “Everything I’ve done before has been about my own abilities, but now it’s a team and that changes everything.”

While Tess is coming into the PDG off the back of a strong summer of road biking, she’s not wasted a second in preparing for the iconic race.

“As soon as the snow came, I started skiing,” she says. “From November, I’ve been doing early morning sessions either skinning or on the indoor bike trainer almost every day.

Each morning before work, Tess can be found racing towards Attelas, clocking 1000m of vertical before most of Verbier has even dragged themselves out of bed.

“This is definitely the most focused I’ve ever been on a particular goal. It’s going to be my biggest challenge yet, because I’ll be working with a team, because it’s been in the back of my mind for two years and also because three years ago I didn’t know if I would ever be able to ski again because of an injury.” 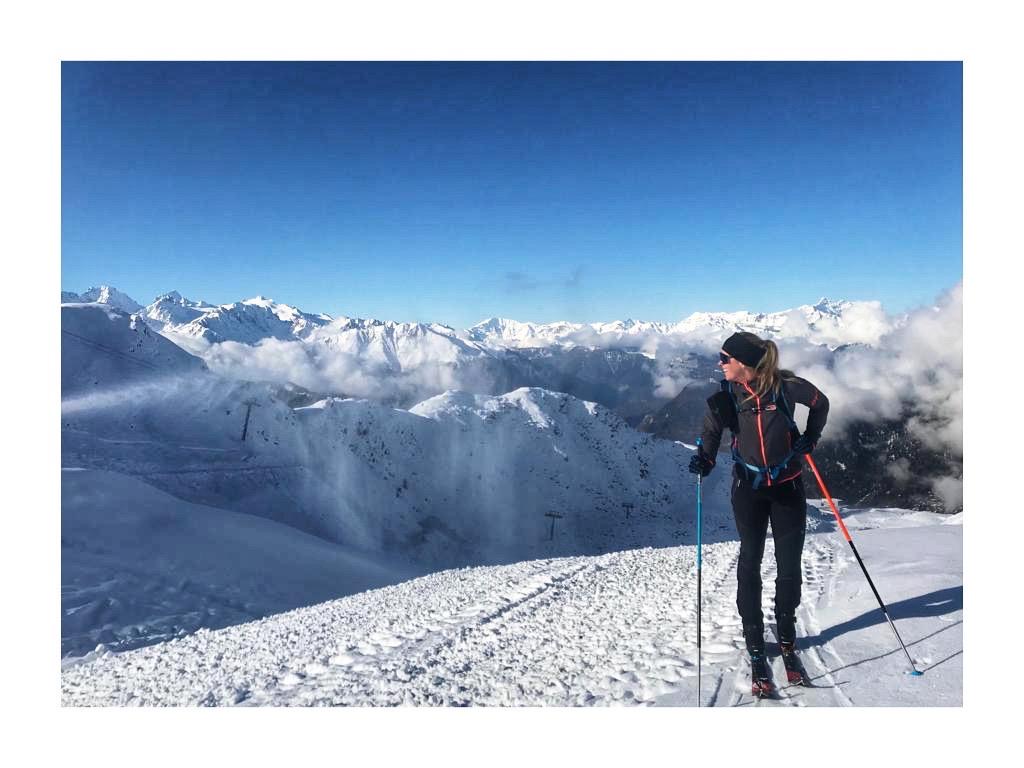 Rentals specialist, Joe Bartholomew is also jumping into his first PDG. Battling early mornings and some long-term injuries, Joe is finding out first-hand what it takes to make the start line of the iconic race.

“With this being my tenth winter, it felt appropriate to try and mark it with a milestone event that I’d be able to look back on to remember.  It also serves as a way to not become complacent in my life, that there’s always room to improve and to push yourself.

While he is an accomplished backcountry skier, the 60km race will be a new challenge for Joe.

“This will be comfortably the biggest event that I’ve had to train for like this.For me, the biggest hurdle is the mental side.  I’ve started training with existing long-term injuries, so I’m trying to both train and rehab at the same time.  It’s a constant battle to push myself to the limit. It’s been a rather up and down experience. I’ve struggled to stay motivated when the physical side has become harder.”

Joe started training in October and despite fighting some injuries along the way, is starting to reap the benefits.

“Once the injuries and pain in the knees started to subside, I was able to start getting some vertical meters in! It’s been pretty tricky building the motivation to get up at 5.45am every morning, but there is an enormous feeling of self-satisfaction once you’ve done it.”

The reserve on Tess’s team this year knows all too well what it takes to do the PDG. Mountain Air Hardware department guru and endurance sport ace Tom Crothall competed in the last PDG in 2018 with Tess’s brother. After countless hours of training solo and with his team in 2018, Tom understands the benchmark needed to take on the iconic race.

While - like Tess - Tom is well versed in endurance races, working as a team in a long race like the PDG was a new challenge.

“It’s much easier on your own terms to train and turn up to a race. But as a team of three it’s much more challenging to be on the same page at the same time.”

“I didn’t want to let my teammates down,” he says. “I was averaging 5000 metres a week. I was skiing to work from Lourtier two or three times a week and doing 2000-metre-plus days on weekends.”

Training as a team was just as important. The squad had to learn how to ski roped together for safety, something that required considerable practice.

“We didn’t know what we were doing; we just made it up as we went. The person in front had to set a good pace between fast and dangerous, so it was important. We crashed lots practicing.

“We also had to decide whether to use elastic on the rope, we practised transitions together to make sure we’re at the same pace and even how we were going to eat.

“There aren’t many elite races where you’re absolutely at your limit, but totally dependent on other people.”

While the 2018 race threw up its own set of trials for the experienced alpinist, Tom is ready to take on the task again if he gets the call.

“The feeling of crossing the line is really cool. It’s been a long, intense night, you’ve watched the sun come up and then you’re running in your ski boots through town. It’s mythical, and absolutely worth it.”